Cats with feline leukemia virus (FeLV) are the most vulnerable kitties in the world. The disease is difficult to diagnose and manage, and requires a high level of individualized care.

Few shelters have the resources to embrace these dear cats, so they are typically euthanized upon diagnosis. But Tabby’s Place knows these amazing kitties are full of life and deserve a chance to thrive.

The importance of saving FeLV+ cats

Meet some of the FeLV+ cats we have helped

The littlest cats need lion-sized tenderness and tenacity. Newborns often arrive without their mothers, making them utterly dependent on our love and expert care.

Quinn’s Corner will allow us to care for these tiny wonders, who are underserved by rescue and veterinary communities due to their fragile nature and need of intense nurture.

Meet some of our former neonatal residents 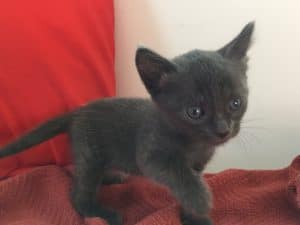 It’s not easy being itty-bitty, and mini-kitty Maeve experienced that to the utmost.

Maeve was only three days old when her mother dropped her in the middle of someone’s open garage. Fortunately, that someone was a kindhearted sort…and a Tabby’s Place volunteer.

It turns out the little one’s timing was practically perfect. We’d just taken in a pregnant mama cat, Tiana, and Maeve arrived hours after Tiana gave birth to a litter of five. Gentle Tiana immediately welcomed Maeve into her nest, and the little “blended family” flourished.

Nursing mother cats and their newborns require vigilant monitoring and safe, quiet accommodations, so Tiana and her tots moved to the foster home of another volunteer. From there, Maeve’s new life just kept getting more marvelous. She survived her fragile early days, grew strong and gleefully goofy, and was adopted with one of Tiana’s other babies. Shortly after her adoption, Maeve was diagnosed with heart disease, but her family hasn’t missed a beat. Maeve receives regular echocardiograms and continues to thrive.

Tabby’s Place is fortunate to have devoted volunteers and staff willing to serve as our “maternity ward,” but relying on fosters limits the number of mothers and kittens we can accommodate. Our Kitten Nursery will enable us to house fragile newborns like Maeve and devoted mamas like Tiana, while providing the specialized care they need at this tender time in their lives.

When I started volunteering at Tabby’s Place, I was one of few volunteers with a spare room and no other occupants of the furred kind. This turned out to be a blessing for me, Tabby’s Place and some special cats. 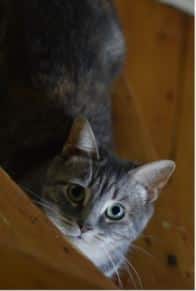 When a gentle cat named Bunk tested positive for FeLV, the sanctuary needed a comfortable place where he could live out his days with companionship. I offered to foster Bu<nk, knowing he would have his own private suite, as well as willing hands and a lap nearby to coddle him.

Bunk’s illness progressed quickly, and we let him go three weeks after he had come home with me. Bunk was in good spirits and continually affectionate despite the weakness and discomfort his late-stage FeLV caused him.

I am currently fostering my second FeLV+ house mate, Diana. While Bunk was in a state of hospice care with me, Diana has the vitality of a dozen “normal” cats. The polarity of their situations has continued to astound me, but mostly it brings me hope.

When I brought Diana home, she cowered in a cat tree for two months before I could even glimpse anything but a mottled torbie blob. Based on my experience with Bunk, I assumed she, too would fade, succumbing quickly to FeLV. Thankfully, that was not the path Diana’s illness took.

Diana’s spirit didn’t fade, either. Slowly, Diana started making appearances in the rest of the house. Soon she sought me out for head-boops and catnip toys.

Today, two years into her foster stay, and completely free of any symptoms, Diana is thriving. Occasionally, coworkers will ask me how the “sick cat” is doing. I look at them confused. “Sick cat?” Diana is quite the opposite of a “sick cat.” “Sick” perhaps in how much she loves worn socks that don’t make it into the laundry hamper.

But Diana shows no signs of her FeLV+ status, and I hope she gets to enjoy the pleasantries of our cozy life for many more days.

Life for Jam, Fluff, and Marmalade should have been scrumptious from the start…but kittenhood gets messy without a mama around.

This tawny trio was born in a feral colony during the COVID-19 pandemic.  Fortunately, our staff includes some seasoned newborn nurturers. Sanctuary Associate Drew lovingly endured sleepless nights bottle- and syringe-feeding the foundlings, keeping them in a carrier on her bed so she could check on them all night. Gentle little Jam was a special concern, as he struggled to gain weight.

But finally, the tiny siblings began to thrive. Their energy rose with their weights, and soon Marmalade, Jam, and Fluff were playing like lunatics. The jubilant jamboree of kittenhood had finally begun. They needed a bit of help in learning to eat regular food, but Drew was there to patiently guide them, over and over, throughout the messy process.

Without a (feline) mama, three little orange kittens had little hope of survival. But with devotion and a little sleep deprivation, Tabby’s Place helped to tell a tastier tale. Many more babies will get a delicious start to life in our world-class Kitten Nursery…with your help.

In some ways, Quinn’s is the quintessential “Tabby’s Place story.” But when the tale is told, it’s clear: Quinn is one of a kind.

Quinn was only a baby when a Good Samaritan found her face-down in the snow. The kitten appeared dead, but her determined rescuer was unwilling to give up even a sliver of hope. This brave woman would be the first of Quinn’s angels.

Tabby’s Place was honored to be the next stop on Quinn’s journey. We rejoiced to see the sweet, sassy kitten gain weight and thrive. But devastating news was hiding in Quinn’s blood. Routine testing showed that the tiny

tuxedo cat had the one disease Tabby’s Place was unequipped to handle: FeLV.

Like her first angel, we were unwilling to give up on Quinn. We scrambled to accommodate her, creating a private suite where she would be comfortable, happy, and visited by a stream of doting staff and volunteers. It was a good life, but we ached for more for Quinn. Despite her dire diagnosis, we were unable to give up hope.

Hope came in the form of Quinn’s ultimate angel, an adopter with her heart set on “the neediest cat.” No stranger to heartache, the adopter was seeking her next hospice pet. With an extraordinary gift for nurturing ailing animals through their final journeys, she was immediately, irrevocably smitten with Quinn. To our astonished glee, Quinn had a forever home.

Quinn’s adoption was the greatest day of her short life. But there would soon be a close second. On a routine vet visit, tests showed Quinn to be negative for FeLV. In baffled joy, we held our breaths, knowing this could be temporary. But over months – and then years – Quinn continued to show no signs of the disease. Her veterinarians, including specialists at a world-class facility, were astounded.

It seemed there was nothing the mighty Quinn couldn’t do. The word “impossible” was simply not in her vocabulary.

It’s only fitting that Quinn is the reason Tabby’s Place’s own impossible dream is coming true. Inspired by her girl – and led by her own one-of-a-kind heart of gold – Quinn’s Mom has made it possible for Tabby’s Place to create Quinn’s Corner.

Angels have accompanied Quinn her whole life long. And now, she’s inspiring a heavenly haven where no FeLV+ cat will go unloved. It’s the honor of a lifetime to build Quinn’s Corner in her honor.

Tanzy
“Tanzanite” is a powerful name for a cat, but this precious gem had a rocky start to life. On a steaming summer day, Animal Control officers discovered the pale newborn, nearly lifeless and punctured with bite wounds that were filled with maggots. Since Tabby’s Place is a haven for cats in the most desperate circumstances, they rushed her to us.
We named the little jewel Tanzanite — “Tanzy” for short — not knowing how long she’d live to sparkle. At only 2.5 ounces, Tanzy was the smallest kitten our vet staff had ever catheterized. But our tenacious team was able to get an IV connected, and they worked tirelessly to save the kitten.
Tanzy pulled through her trauma and shimmered to life, only to face a new mountain: paraplegia. Although we initially assumed Tanzy’s inability to walk was caused by her injury, X-rays revealed a birth defect in her spine.
Undaunted by her Special Needs, Tanzy was overflowing with life and spark, bringing laughter and love everywhere she scooted. Thanks to world-class care in her earliest days, Tanzy is now a flourishing young lady, as cuddly as a teddy bear but as confident as a queen in her forever home
Marjory

For Marjory, that promise made the difference between life and death.

We’re always saddened when adopters return a cat to Tabby’s Place. Marjory’s family simply felt they “didn’t have time” for her after 4 years. We may not understand their reasons, but we’re grateful they brought Marjory back to us.

When she returned to Tabby’s Place, Marjory was sad and sickly, with painfully abscessed skin. A biopsy revealed ulcerative dermatitis. Marjory responded well to steroid therapy, and slowly began responding to our affection. The rejected tortoiseshell was letting herself love and be loved again.

We routinely test and re-test each new (or returned) cat for both FIV and FeLV. Marjory’s second test was a dagger in all of our hearts: our gentle girl was FeLV+. It was a mystery how she could have contracted the virus, as her adopters claimed she hadn’t been exposed to other cats. But, now that we knew, we’d need to create a private suite for her, both to protect her fragile immune system and to prevent the spread of FeLV to other cats. Marjory settled into the sunny “bachelor pad” vacated by the late Max; it was the only “one-cat” room at Tabby’s Place.

Before we could breathe a sigh of relief that Marjory was in a stable haven, crisis struck again. Marjory suffered a seizure, which left her struggling to stand. Blood tests and an MRI revealed nothing amiss, and a neurologist could find no explanation for Marjory’s episode. Gradually, she began to improve, walking – albeit in a clumsy way – eating, and generally loving life.

Marjory’s sunny room became a favorite hangout of staff and volunteers, and the delighted tortie found herself seldom alone. She gushed with gratitude, spending most of her day purring, playing, and rubbing her many lovers’ legs with all her might.

As of this writing, Marjory’s story has gotten even sweeter – albeit, again, in a mysterious way. Like Quinn, Marjory now tests negative for FeLV. This good news is still inconclusive, as we haven’t been able to determine whether the virus may still be hiding in Marjory’s bone marrow. But, whatever the future holds, Marjory will be held by a love that will not let her go, and a promise that saved her life.